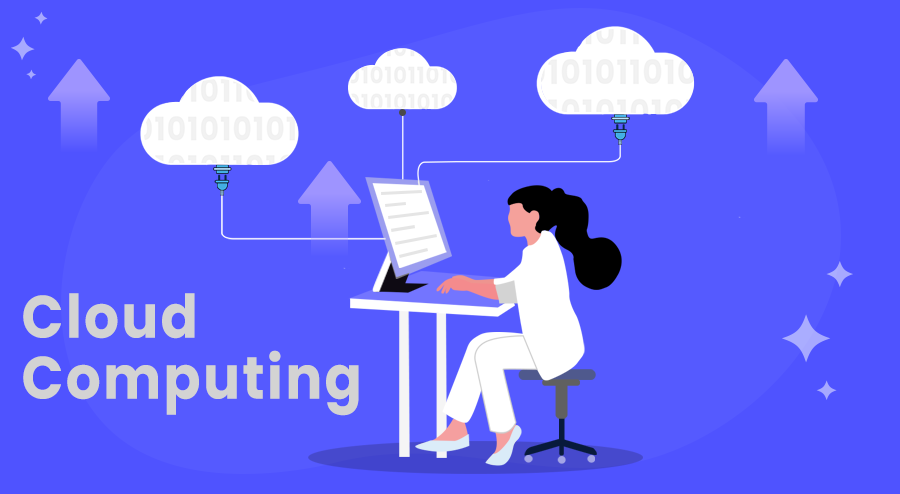 Cloud Computing 101: Benefits, Types, and Cloud Services You Should Know

In order to understand his concept of cloud computing thoroughly and simply, let’s break down the term into two. First, understand what cloud means in technology. In simple terms, you can say that the cloud is a synonym for the World Wide Web or the Internet, but instead of providing access to the websites, the cloud allows you to access & use the software.

Now let’s move on to computing. Compute refers to the resources that are going to be used for the successful operation of the cloud-based software. For example, if you are using a 3D-graphic rendering application, then it definitely requires hardcore CPUs, RAM, GPUs, etc. This hardware is called computing resources.

In a nutshell, we can say that cloud computing is anything that involves providing computing services over the cloud. Some of the most popular cloud computing companies’ examples are Salesforce, Digital Ocean, AWS (Amazon Web Services), Dropbox, etc. Even a gaming company like Ubisoft is exploring new grounds for cloud computing. We are going to discuss more of that in the coming sections.

What is Cloud Computing Benefits?

Cloud Computing is flourishing in every sector and becoming popular in every industry, size, and sector. The way of utilizing cloud computation differs from company to company. Some might use it for database backups only and there are some companies that use clouds for providing their Software-as-a-Service or SaaS.

Case Study: Adobe is a computer software company that primarily provides creative software products. You may have heard some of them like Adobe Photoshop, Adobe Acrobat Reader, and Adobe Creative Cloud. Initially, they used to sell on-premises software to each customer. But it was leading to software infringement and they were making huge losses. To overcome this problem, they entirely moved to cloud computing and started providing all their applications in their Adobe Creative Cloud. Now the users can access their software as a service.

Without further ado, let’s have a look at the benefits of cloud computing.

Now you have understood the fundamentals of cloud computing and its benefits, let us move on to the next part, i.e. its types.

Essentially, there are four types of cloud computing and we are going to explain each of them below.

Most of the cloud services providing companies you may have heard of are public cloud, e.g. Amazon Web Services (AWS), Microsoft Azure, IBM Cloud, Google Cloud, Alibaba Clouds, Oracle Cloud, etc. There is one thing common between these, which is that all the owning entities develop the infrastructure and the end-users of their services don’t own the clouds.

Apart from this, there are some public cloud service providers that even provide on-premise data centers. In essence, we can say public clouds are those that have multiple tenets. All the examples we mentioned above are all the paid services, but there is one cloud provider (The Massachusetts Open Cloud) that allows you to use the clouds free of cost. So this clears the fact that Fee Structure is not a contributing factor in being a public cloud.

You can say hybrid clouds are one of the most complex as compared to others. This is because every business builds its hybrid clouds as per their requirements. I gave some of the common solutions below.

Even though hybrid clouds are the combination of multiple clouds, they are managed and maintained as a single environment.

Multiclouds, as the name suggests, are built by combining more than one cloud from different vendors. These vendors either could be public or private clouds.

Multiclouds and Hybrid clouds may sound the same, but there is a key difference. A hybrid cloud needs to be treated as a single cloud and it is managed by using some integrated management and orchestration platform. Apart from this setup, all clouds that are made by combining two or more clouds are simply multiclouds.

It suggests Hybrid cloud is the subdivision of Multicloud.

Cloud Computing Example We Use in Real-Life

Some of the world’s largest tech giants offered these cloud services and, I am quite sure, most of us have used these. Let’s have a look.

Cloud computing is spreading its wings and new technologies like Metaverse are just an additional boon. For instance, Ubisoft, one of the biggest gaming companies in the world, has recently announced its own cloud computing project called Ubisoft Scalar. It is apparently going to be the biggest ever game world the people have ever seen. While giving a sneak peek of Scalar, Ubisoft talked about the capabilities: “the construction of gigantic game worlds at a scale far greater than anything that’s come before” and support “massive numbers of assets, simulations, AI and player entities”. I believe we have only seen the tip of the iceberg. There will be way more depth and influence of this technology.

Action Buttons in SugarCRM: How to configure it?

There is nothing quite as euphoric as performing every action faster in records of SugarCRM.

A Beginner’s Guide to IMAP and SMTP Server Settings