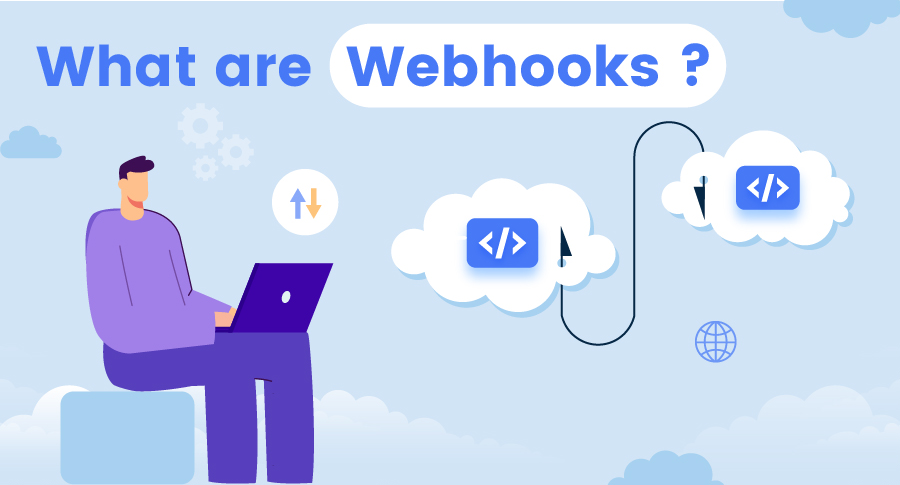 What are Webhooks? Is It Different From API? Explained with Examples

Webhooks are like triggers, they let two online applications talk to each other when something happens in either of them. For example, using webhooks Twilio routes phone calls to your phone number. In this case, the event is- receiving the phone call on Twilio, and the trigger is- routing the call to your phone number. You see, a webhook is to make communication possible between two applications by pushing data back and forth.

From the introduction, we have understood that webhooks are used to share real-time information between two platforms whenever a certain event occurs.

Other familiar names for webhook are web pullback and HTTP Push API. Unlike API, it is driven by events rather than requests. Also, API (Application Programming Interface) provides two-way communication between applications based on requests, on the other hand, webhooks provide only one-way communication that too based on events. It will be not wrong to say that webhooks are like lightweight APIs. We are going to delve into the elaborated comparison of API and Webhook in the next section of this article.

What is API (Application Programming Interface)?

You can think of API as a doorway through which applications can share information between them. Actually, the word “interface” in the API full form illustrates the key goal of an API.

The function of an API is a lot like a web browser. For example, a browser act as an interface for end-users i.e. human. We use a browser for sending, receiving, and updating information over a web server. Just like this, an API lets you do the same thing between two applications.

There are over 23,000 different types of APIs in use and we are only talking about publicly available ones. Apart from that, there are hundreds of thousands of internal APIs are being actively used around the world. Nowadays, it has become one of the most common ways of sharing information between two applications.

It won’t be wrong to say that webhooks are one of many types of API. A webhook is powered by events, whereas an API is driven by requests. As you know, in API one application makes a request to the second application and gets the relevant response (information). Things are different in webhooks, here the second application sends the data over to the first application when a certain event happens. You might even call it a reverse API. Webhook has become a lightweight solution since more businesses are leaning toward interconnected web applications.

Let’s understand with an example, you want to email via Mailchimp when a customer makes a purchase on your website built on WooCommerce. Rather than Mailchimp constantly asking WooCommerce if a new order is placed or not, it makes more sense for WooCommerce to send over data to Mailchimp as soon as a new order comes in. I hope you understand the purpose of webhooks i.e. instead of requesting the data, the application at the receiving end will wait and the sender application will automatically transfer the data as soon as the event occurs.

Now you are familiar with the concept of Webhook, it’s time to get some hands-on experience. And fortunately, there are quite a few platforms that allow you to try webhooks. Here are some examples.

In this blog, we have covered almost everything about webhooks like what are they and how they work. We have also included the in-depth comparison between API and webhooks, so there is no confusion whatsoever. Now you can use these user-defined HTTP callbacks using any server-side programming language. You just need a web application that accepts HTTP requests.

7 Ways to Troubleshoot DNS Issues Related to Resolution in 2022

When your DNS service is down, you need to find a way to fix it

You will rarely find a business today that hasn’t heard about the Twilio Live concept.